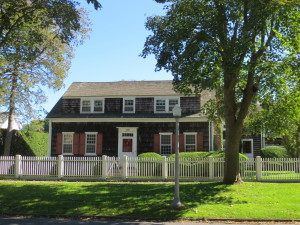 The land upon which St. John’s is located was first purchased by Thomas Topping from the Shinnecock Indians who inhabited this area in 1650. In succeeding generations it passed from several Toppings, Howells, Herricks and Rogers until 1911 when the owner at that time, Albert Foster, sold it to the Mission of St. John’s Church. The Mission, under Vicar Samuel C. Fish, had been established in 1908, and was temporarily holding services in the Parrish Art Museum. The purchase price was $8000.

Ground breaking ceremony for a new church took place on August 18, 1912, and construction began that October, with an estimated cost of $16,680. The Reverend Samuel Fish served the parish for 29 years, being succeeded then by Rev. Marland Zimmerman. Other Rectors of St. John’s have been Rev. Alexander Hawke in 1943, Rev. Hobart Jude Gary in 1957, Rev. Malcolm L. Foster in 1966, and our most recent Rector, Rev. Peter M. Larsen in 1988. Peter retired in September of 2014 and the church called Rev. William Patrick Edwards, most recently from Baton Rouge, as its seventh Rector.

The Church building remains today much as it was in 1912. The connecting Parish House was built in 1962.

The Rectory of St. John’s, on adjoining property to the Church, was begun by the Topping family in 1730. It is now a wing of the Rectory and houses the dining room with its original wainscoting and oven-fireplace. The main part of the house was built in 1750. An alteration in 1918 added the upstairs verge. In 2015, the Rectory underwent an extensive and comprehensive renovation. For a series of FAQ’s on the work, click here. 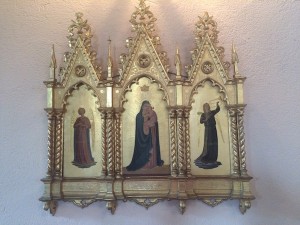 Highlights of St. John’s history include:

To read a lively account of St. John’s history written to celebrate the church’s 100th year anniversary in 2013, click here.  To see a selection from the St. John’s archives, click here.